Go hands-free and keep your pockets empty with this compact, yet functional sling bag.

With a durable and waterproof X-Pac® VX42 fabric, this sling bag will be your go to for all those outdoor adventures. It features an easy to open magnetic flap for added convenience. 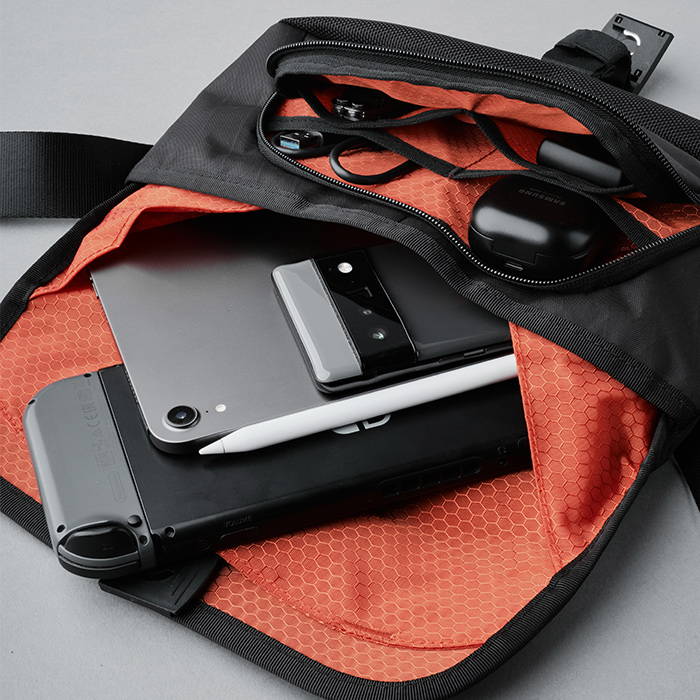 Three compartments and multiple pockets to keep all of your everyday essentials stored neatly.

Thoughtful organization and compartments to safely store your daily and travel essentials in the right place.

Theft-deterrent flap so you can feel safe in crowded places.

Compact & light design that won't weigh you down. 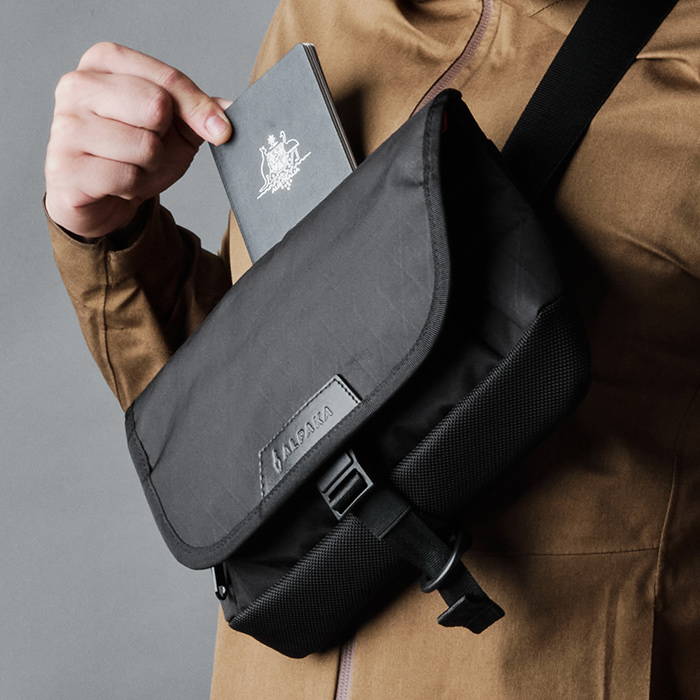 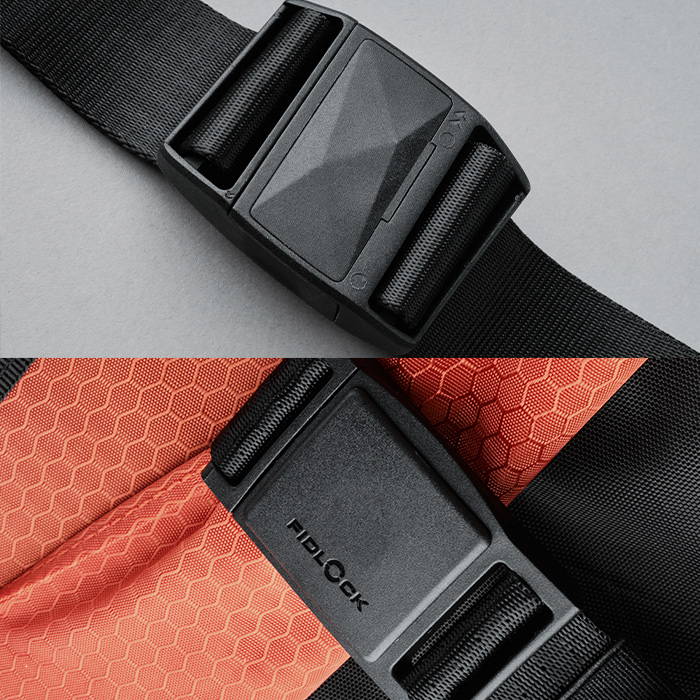 Premium, German-designed magnetic Fidlock buckle for that magic feel on the front flap.

Convenient and easy to use magnetic Maglockz buckle so you can unbuckle the strap with one hand but stays secure when wearing the bag.

Waterproof fabric will keep your gear dry even under heavy rain.

Water won't penetrate the inside of the bag with these naturally hydrophobic weatherproof fabrics. 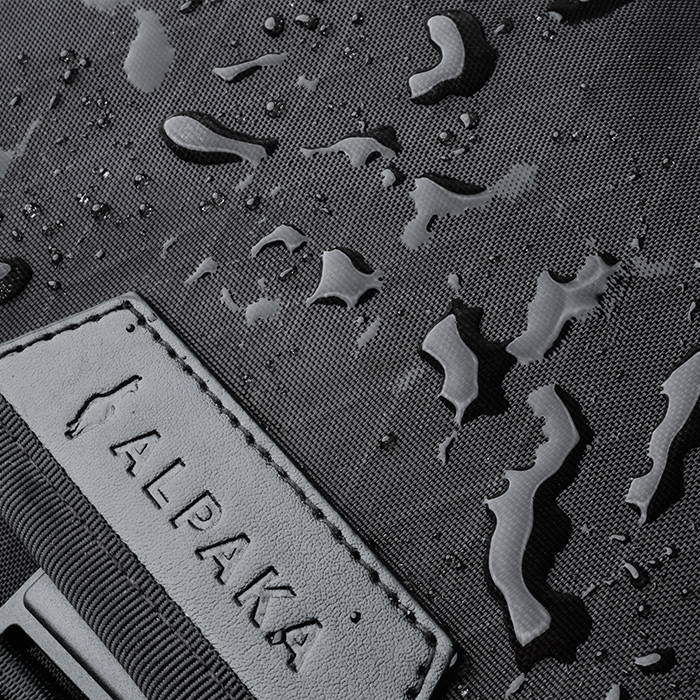 Thank you for submitting a review!

Your input is very much appreciated. Share it with your friends so they can enjoy it too!

Perfect size. Very solid and robust. Perhaps a pen loop would be useful and some small pockets like in your tech case for cables. Otherwise ace!

South Korea
I recommend this product

I bought this for my son who is really fashion conscious and he loves it. It’s not only practical but the colour way and finish make it really stand out.

Perfect everyday-carry bag for my needs. Don't need no cargo pants/shorts with this baby. Its just the right size to hold my phone, usb powerpack, sunglasses, work id, wallet, car keys, edc tool, ear pods, wipes, cable etc. It's stylish without being pretentious. Absolutely love it. Alpaka nailed this one.

The quality of this bag is up there with the best and it is incredibly stylish. Most importantly it's really practical and carries everything I need.

Amazing! This bad is awesome. I love traveling with it.

My air sling v2 has arrived in Canada and i LOVE IT. It's just the right size for day to day going out. Fits my iphone, lovely little detachable key chain in the back pocket, slick latch designs, and you can tell this product has been well designed. It feels like high quality materials through and through and I love the black & orange contrast. Even wide enough to hold folded letter sized paper. This is going to be great in the wet Vancouver climate.

Exactly the size I needed

I wanted something that could carry my kindle or iPad mini and still fit a sunglasses case, wallet and phone and this does just that! The only thing I would change would be the device pocket to be either a little stiffer or have a magnet or strap to hold it up because when not in use it just ends up scrunched down at bottom of the bag. And the buckle on the shoulder strap is bulky.

Great improvement over the V1!

I bought the original Air Sling through a Kickstarter campaign, and, while I liked the design, I was not happy with that purchase. My only complaint was with the strap, but it was enough of an annoyance that I rarely used that bag. The strap was bulky, uncomfortable, and hard to adjust while being worn. The V1 also did a terrible job of managing loose strap after adjusting, and that was not a good look. The V2 solves every issue I had with the previous version's strap, and now I can see myself using this sling on a daily basis. The Air Sling V2 was not my first choice for a sling purchase (mostly because of the bad experience I had with the V1). I was originally looking to the Modern Dayfarer Active Sling, which has a similar aesthetic, but that one was sold out. My third choice was the Aer City Sling, but I ultimately went with Alpaka because I wanted a sling whose aesthetic wouldn't look of place with a button-up or gym clothes. I do think the Modern Dayfarer bag looks slightly better, but the Air Sling 2 is undoubtedly the better bag overall when you factor in the how intentional the design is. I stuck with Alpaka vs Aer because, not only is it more pleasing to the eye but, the taller design of the Air Sling 2 guaranteed that I'd have space for a Kindle or large journal while that seemed questionable with the Aer Since I'm not some who typically carries a bag or sling, I wanted something on the smaller size to reliably carry my belongings when pockets aren't enough—i.e. when I'm wearing active clothes or when I want to carry around the aforementioned Kindle or journal. This bag is actually bigger than I wanted, but Alpaka made the right choice. Any smaller would have only been useful to replace pockets when you have none, so I appreciate the extra space with the Air Sling V2, though I would still appreciate a smaller sling for those occasions where I really only need to securely carry the essentials—if Alpaka made an Air Sling Mini, I'd get it in a heartbeat. In the meantime, I have to remind myself that I don't need one of their bigger slings...yet. Compared to the V1, the V2 is taller and feels less bulky with the amount of items I currently have in it, so that's another improvement. I could probably comfortably carry even more, though that would cause it to bulge out in the same way the V1 does with less items, but I appreciate the versatility. As mentioned before, the strap was improved immensely, and that includes comfort. The straps are angled, and that allows it hang comfortably on my body whether it's on my chest or back, and it also doesn't dig into my neck too much like some bags do. I wasn't keen on the X-Pac fabric from the photos and descriptions of it, but, after seeing it in person, I like it a LOT more than I would have expected. I have the bag in all black, and it looks sleek and durable. This is exactly the sort of style I wanted in a bag I plan to use every day. The main pouch is split in half by an internal divider, and it feels very spacious on either side. The orange accent helps to highlight your belongings and make them easy to find while digging around. Under the flap on the front of the bag, you have a zippered compartment with four internal pockets, two on either side, and space in the middle to still be able to just drop something in without using one of those four pockets. On the back of the bag, you have one final zippered compartment that's split into three—two pockets plus one large space for dropping items—and it's here where you'll find the key leash. If you have a big phone, keep in mind that you'll have it lay it sideways—my Galaxy S22 Ultra is too tall to be placed vertically here. The bag is set up in a way that'll make it easy to organize and retrieve your belongings. Overall, this is an incredible bag, and I am happy about this purchase. Here are a few changes I would have liked to see: (1) I wish there was some sort of internal pocket UNDER the flap, or possibly a stealth pocket on the outside of the flap, that I could have placed a transit card or work badge so that they would be usable without opening the bag to retrieve them; (2) because the buckle to open and close the bag is slightly under the flap (and for a good reason—security), it's a little cumbersome to use at the moment—the lower half of the buckle goes over the top half to snap shut, and I think this should have been reversed (so that the buckles would snap shut when closing the bag)—this is probably just something I'll get used to over time; and (3) I would have liked a D-ring near where the straps connect to the bag or near the strap buckle just so that I'd have more attachment points. I'm sure that when I use the bag more, more would come to mind, but that's what sticks out. Great bag. Glad I didn't let my experience with the V1 discourage me from making this purchase.

Hong Kong
I recommend this product

Neat and Handy! A sensible-sized sling bag for most casual purposes!

Singapore
I recommend this product

Best EDC bag ever, able to fit everything I need for a day.

Singapore
I recommend this product

I’m a very rough user and the bags from ALPAKA is so durable that it amazes me. Will continue to support the brand.

Hong Kong
I recommend this product

Good quality, compartment design fulfill my requirements. Packing of shipment looks a bit cheap but no affect the bag itself

Germany
I recommend this product

Well made and with many small compartments. I bought it to take my iPad Mini 6 with me. I‘m using a Moft case for the iPad and it will fit well in this sling. Like to open the bag to see this great blood orange ripstop nylon with honeycomb pattern.

Malaysia
I recommend this product

Overall about this bag nice and attractive when worn anywhere.

Well made, good pockets and organization. Using it as my grab sack on my motorcycle for keys, registration and wallet. Big enough for my essentials and can still add in spare gloves, extra earbuds and such.

The shoulder strap is comfortable and moderate in size. It is suitable for leisure shopping. The materials are exquisite and the workmanship is very good.